Introduction
1. Purpose, construction principles and solved problems
2. Basic technical principles of operation and characteristics of GISS
3. Main directions of application and economic efficiency of GISS
4. Proposals for the creation of the GISS orbital group
5. Development of the scientific and technological base of the rocket and space industry and related corporations and enterprises of radio electronic industries in many countries
Conclusions
List of accepted abbreviations
A little about the company “intellectual digital techniques” llc
Appendix a1. Giss service areas
Appendix a2. Energy calculations of radar detection
Appendix a3. Decision of the scientific and qualification seminar «radiophysical methods in aerospace research of natural and technogenic environment» ire named after v.a. kotelnikov ras

In accordance with the specific goals of its creation, GISS functions as an international global information satellite system in the interests of the entire world community and provides a solution to many applied problems. Indeed, as a low-orbit space system, it controls the entire territory and near-earth space of the globe, and it must be created in the interests of all countries, which is much cheaper due to the feasible contributions of all participants in its operation.

Appendix 1 shows the GISS service areas for different regions of the world. In this case, it is assumed that the orbital group is deployed at an altitude of 800 km and contains 288 spacecraft of two types, following one after another every 15 degrees in 12 orbital planes. In this section, we will give only three slides (Fig. 3.1, Fig. 3.2 and Fig. 5.3) to understand of a independence of the use of the GISS by any of the countries to monitor of the interest territory, regardless of other countries. 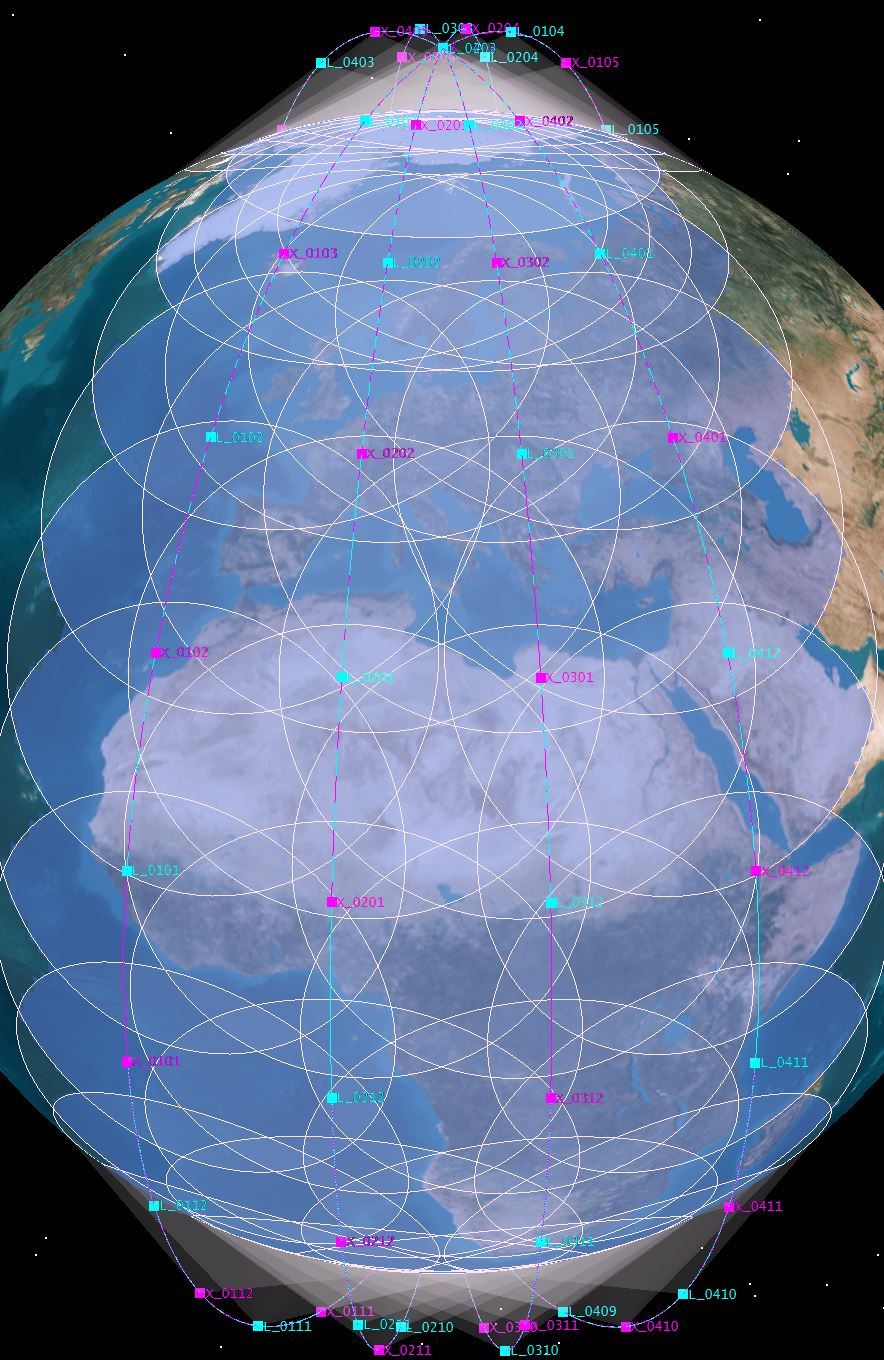 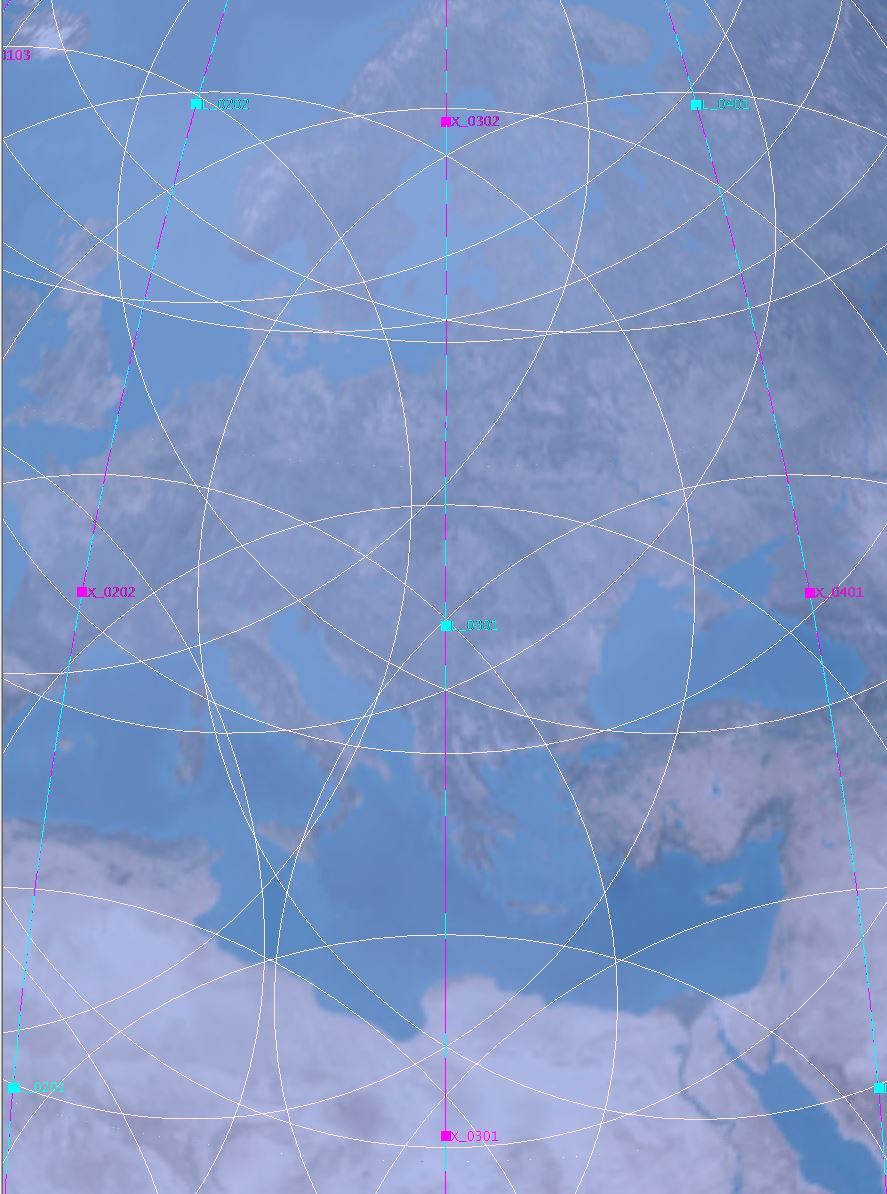 Fig. 3.1 and 3.2, it can be seen that, in addition to communication services, radar surveillance is continuously provided over the European part, including the Mediterranean theater, when ground-based GRPS are deployed in three joint visibility zones of the discharge line on the territory of different countries. Each of them can carry out radar monitoring of the entire global zone and control what it wants and whoever it wants.

At the same time, other countries do not see who or what this country is controlling. Since the choice of the direction of the formation of narrow beams of the reception diagram of reflected signals, coordinates and time of control of the desired section of the zone or object occurs at the ground GRPS of this country.

All representatives of the “peaceful community”, in principle, do not care what Israel is watching in Egypt or in Iran and, conversely, what Egypt is watching in Israel or in Ethiopia. Using inter-satellite lines of information and signal streams of transmitted and received reflected signals over a 100 ms interval, the situation in the Mediterranean Sea can be monitored in the United States or China, or in a GRPS near Moscow.

A circular polar orbit with an altitude of 800 km, the angle forming the cone of the spacecraft antenna is 61°, the angle between the orbitals is 15 degrees (12 orbit), the number of spacecraft in one orbital is 24. Highlighted in blue – the area of simultaneous coverage of 4 spacecrafts

The issues of access to information are resolved by international agreements on the creation of the GISS and the envisaged measures of collective management of the modes of operation of the onboard special complexes of the GISS spacecraft.

Likewise, continuous monitoring of the Arctic zone (Fig. 3.3) is available for ground-based GRPSs of all Arctic countries. Anyone who wants to can observe the ice situation, the movement of a favorite iceberg, or, if it is important, the emergence of a new hole for launching an intercontinental missile from a submarine, how many missiles were launched and where they flew. This opportunity is available both for China, if it is interested in it, and for any other country.

3.1 Creation of conditions for international security, ensuring the deterrence of aggression and prevention of the possibility of a sudden unrequited nuclear missile attack.

The solution to this problem is ensured through global and continuous three-dimensional radar control over the activities of strategic offensive forces of eventual adversaries, timely detection of missile launches of various purposes and basing.

Military analysts can develop this thesis ad infinitum and inform us, peaceful TV viewers, frightening horrors about 5–10 minutes of a nuclear warhead’s approach, when there is no time to make decisions about retaliatory strike.

With the functioning of the GISS, any country, observing the activities of the strategic offensive forces of its eventual adversary (international “partner”), despite the many days of press noise and pumping up public opinion, can reliably see real preparations for an attack. There can be no sudden onset of the attack.

For example, the location of the air bases of all international “partners” is known to all other “partners”. If all the bombers and missile carriers rolled out of the hangars and loaded ammunition from the warehouses. If all warships and submarines left their basing points, and aircraft carriers took on board the air wings. Draw your own conclusions about the need for a preemptive strike.

This should be stated in the military-political doctrines of the countries, and each country (“partner”) should know that there can be no sudden donning during the functioning of the GISS.

To illustrate from the period of peaceful life (slide in Fig. 3.4), one can cite the possibility of monitoring the development of tasks of the US Strategic Air Command (SAC). 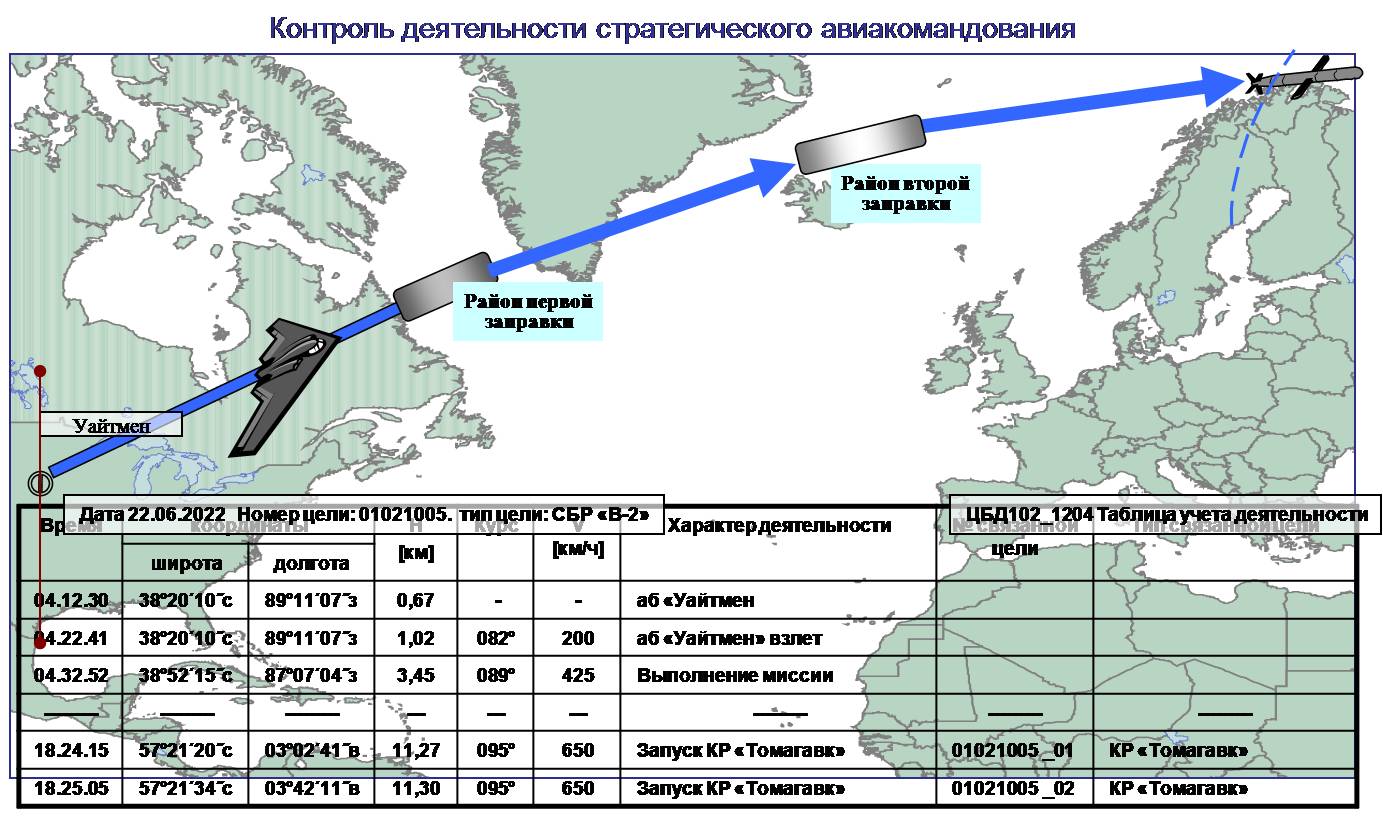 We apologize to the US SAC for using their Whiteman airbase as an example, not because we are their opponents, there are simply no other pictures at hand. This example will be true when the United States controls the airbases of China or the airbases in Engels in Russia, any Indian airbase for Pakistan, the airbases of Iran and Israel for observation by one “partner” after another “partner.” GISS is in theory a peacekeeping tool for all countries and allows monitoring the state of readiness and activities of strategic offensive forces in the interests of their national missile defense and air defense centers.

The second example of illustrating the capabilities of GISS is shown on the slide in Fig. 3.5 to ensure continuous monitoring of the location and nature of the activities of the naval forces (Navy) in bases, at crossings and in the zone of armed conflict (exercises).

We also apologize, the US Navy is not the biggest aggressor, but a favorite object of observation in the Soviet Union, I have no other ready-made pictures at hand. This example is valid for control over the naval forces of any country. Whose navies do the countries participating in the creation of the GISS want to be watching. At the same time, maneuvering, takeoffs of aviation, helicopters, missile launches can be monitored with the frequency required for each country, and other “partners” can only guess about it.

Similar control can be provided over mobile missile systems and their launchers, mobile air defense systems, convoys of vehicles of any terrorists, mujahideen of Afghanistan, pirate ships on the islands of the Malacca Strait, etc.

Each of the countries participating in the creation and / or use of the GISS will find what it needs to control.

The solution to this problem is ensured, since with the global functioning of the GISC it will be impossible to secretly provoke something in international waters and airspace of any country.

Continuous recording and archiving of GISS signals in ground-based centers for their reception and processing provides the ability to objectively investigate emergency events, restore the situation in the air and ground space at the required time and in the specified zones of terrorist acts that occurred in the past.

For example, the sad events with two Malaysian airliners MH370 and MH17 (Fig. 3.6). If the GISS functioned, it would be enough from the time and place of take-off to conduct a subsequent analysis of the route, flight altitudes, circumstances and place of death. 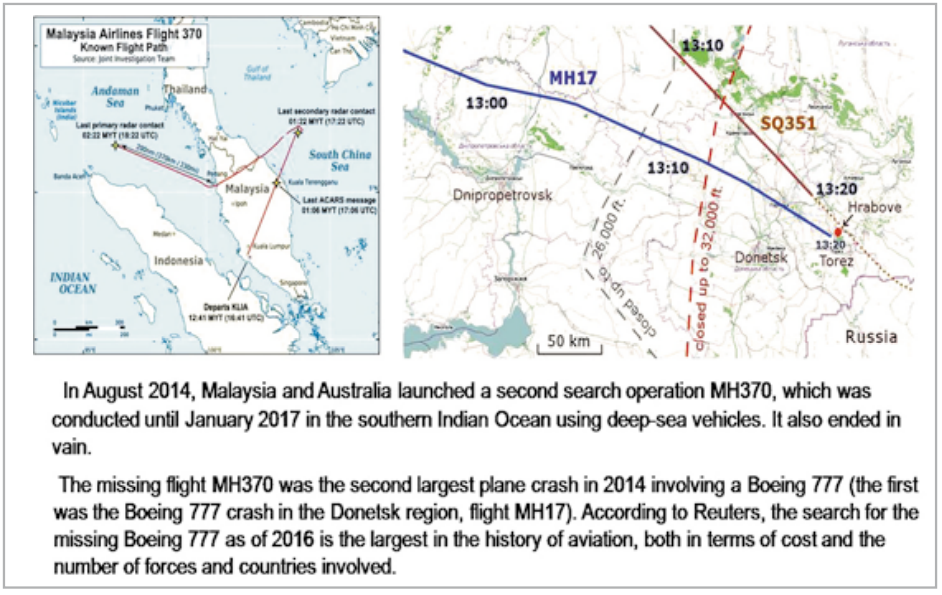